The fuel market boomed, what was considered a "debt lump" suddenly turned into a "golden lump", traders made a fortune

While the US labor market is the hottest in decades, the hottest job right now in the world's No. 1 economy may be in the fat business.

The rise of the "inferior" fuel

Indeed, it is animal fat, waste oil and even lubricating grease.

As it turns out, they are essential parts in the production of eco-friendly diesel fuel. This is a business that suddenly exploded as fossil fuel giants like Exxon Mobil Corp. and Chevron Corp. race to reduce emissions as well as take advantage of the advantages set by the state government of California and the Government of Canada.

The prices of vegetable oils, used cooking oils and fats are skyrocketing with huge after-sales for those who can afford the quantities they need. However, this job requires many relationships with farmers, restaurateurs and processing plant managers across the United States.

Few people have the caliber of Rolodexes, which is raking in $800,000 a year. Of course, that's not comparable to the money people make in the US stock and bond markets. However, for an expert in vegetable oils, that number is twice, even 3 times higher than usual.

For decades, the fat trade was considered a "strange" profession. Very few people know about this business and few people are interested in it. In some countries, even these waste greases pose a threat to the environment and cause enough trouble for the people who make them. 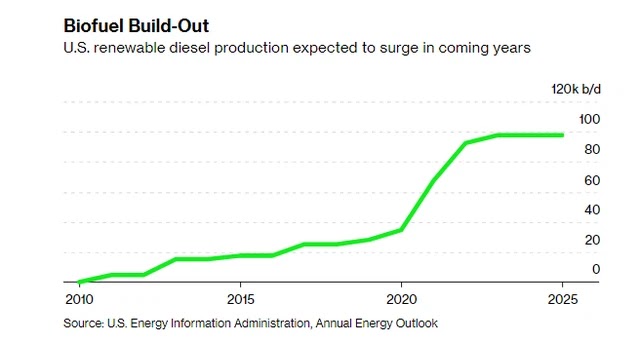 Patrick Bowe, chief executive officer of The Andersons, a 75-year-old crop trading company based in Maumee, Ohio, said: "Traders in this space are just by-products. Now , they are one of the people with the most attractive jobs."

Bowe himself has recently set up a division to sell this ingredient.

In addition to the traditional oil giants jumping into the green diesel race, many are also planning to reach net-zero emissions by mid-century. Increased use of biofuels is key.

"This trend is driving demand for vegetable oils and prices for used cooking oils and animal fats have hit 'unprecedented' levels over the past year," said David Elsenbast, president of AgriBio Consulting LLC based based in Iowa, shared.

The used cooking oil market in the US has skyrocketed from $700 million a decade ago to $2.5 billion this year. Competition for so-called "raw materials" could intensify as the conflict between Russia and Ukraine disrupts trade.

New battle in the bio-oil arena

Fossil fuel companies are trying to figure out how crude oil trades differently from green diesel. While buyers and sellers of vegetable oils, used cooking oils and tallow are seen across the agricultural and food sectors, only a handful of US traders see its opportunity.

Unlike petroleum, which is spewed from the ground non-stop, flows through pipelines and is traded in large quantities, biofuels are highly diverse in supply. They must be collected from many farms, restaurants and processing plants. Traders can also only trade relatively small amounts, transporting them by road, rail or on barges. This also means that disruptions can happen at any time, especially in the current lack of drivers.

"The complexity along with the requirement of broad knowledge makes not many people willing to work in this field. Lack of good enough personnel also makes it difficult for companies to enter this field," Billy said. Burns, a risk management consultant at StoneX Financial Inc., who specializes in fats, oils and greases.

To make renewable diesel, the chemical composition of natural oils and greases must be changed in a process that involves the use of high-pressure hydrogen and the removal of oxygen. As a result, fuel can be fed into the pipeline and the engines can be directly substituted for conventional gasoline.

An unnamed vegetable oil expert from a major US agricultural company said job offers related to this field appear at least once a week. Employers offer salaries of up to $ 800,000/year, double the current rate. Taking advantage of a lot of money, energy companies are trying to attract this high-quality human resource from agricultural companies.

John Campbell, chief executive officer of Ocean Park, an investment bank specializing in the biofuels industry, said: "Holding the raw material and relationships is a huge driver of deals." . However, when this industry brings desirable profits, competition also increases because of that. More and more big players in the agricultural sector are joining, including agricultural giant Cargill Inc.